Every learner defines learning differently, and so is my interpretation of Connectivism. Would you agree that Connectivism is a term, or a name that you or me would like to call it, so as to make sense of learning. This is similar to the concept of sensemaking – which is defined as the process of creating situation awareness in situations of uncertainty.

Here is a definition of sensemaking

The process by which individuals (or organizations) create an understanding so that they can act in a principled and informed manner.  Sensemaking tasks often involve searching for documents that are relevant for a purpose and then extracting and reformulating information so that it can be used. When a sensemaking task is difficult, sensemakers usually employ external representations to store the information for repeated manipulation and visualization. Sensemaking tasks inherently involve an embodiment as an actor (or actors), an environment, forms of knowing, and ways to work with what is known. Working can take different forms — such as logical, metaphorical, physical, or image-based reasoning. See also external cognition

Here is another important learning that I have which arose out of networked learning or Connectivism. Our prior knowledge was relatively less influential than emotions, beliefs, cognitive factors and mental models – all components of sensemaking. People (leaders, managers and educators and learners) are more successful in connecting with other people (leaders, managers, colleagues, workmates, educators and learners) if they understand each others’ needs and expectations, and thus be able to form a closer bond both emotionally and cognitively. People who could leverage the affordance due to technology, media and learn effectively through the networks would be at a competitive advantage over those who rely solely on the traditional formal education and learning methodologies. There is no single solution to all learning scenarios, and so every learning must be sensed and acted upon with strategic learning strategies and a contingent and emergent learning approach.
I still reckon the learner centred approach in education and learning provides the best outcome for the individual in terms of the achievement of personal goals and achievement (ego’s and self actualisation). Education that is building on the individual’s achievement and satisfaction is also the responsibility of institution and society at large. Without satisfied people in institution, how would one expect great performance from people? History tells us the importance of motivation (such as the Maslow Needs Hierarchy) – that people work best when they are motivated intrinsically AND extrinsically, and with the right environment for each of them to excel. Without an adequate culture of nourishment for individuals – with network and technology capacity of action, people would not be able to achieve higher potentials in the networks or COPs. The best way to achieve such nourishment could be through individual leadership empowerment and development.

So, leadership is no longer a one person leading the way, but a process, a human approach which allows everyone to take up the leadership role, in the networks, to lead and support each other in achieving the individual’s goals. Since each ones goals might be different, such network leadership approach would enhance individual’s understanding and desire of leadership, when they take up leadership position at work, in the community or in government organisation. Such connections would then need to be further developed so as to establish the relationship required for networking and collaboration.

In summary, leadership is about relationship, and nurturing of relationship with others in the networks.

How about this connections or relationships?

What did you learn from this? 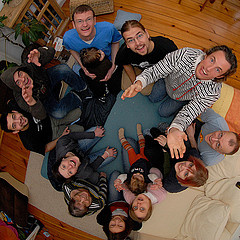