What are the habits of great leaders? Irmeli responded: After experiencing http://www.aboagora.fi/ she added: Our duty is to re-invent the 10 habits by discovery and experiment. They don’t work any more as such.

Discovery and experiment.  That’s a sound advice in re-discovering about leadership.

Leaders are those who inspire, and influence people with their passions, dreams.  They touch the hearts of people, with their visions. Simon explained with his Golden Circle on the Why? How? What? and that people buy what they believe – the Why.   People buy into the ideas and belief of the leaders as they trust what the leaders envision.

I have a dream illustrates this well.

How about leadership in the 21st century, in a networked environment?

In conclusion Great Leadership is based on a belief that is shared by the leader, who inspires people with a vision to create a better future, for the people, the network, the community and society at large.  One of the key principles could be: Honor people, and the people will honor the leader.  Fail to honor the people, and the people will fail to honor the leader. Great leaders have a purpose and vision for change, and they see things differently, viewing challenges as opportunities to develop, improve and innovate. Great Leaders are those who serve others in the network and community, by their action, and by their sharing of beliefs, passion and dreams.  Such leadership is also embedded in each of us, through our connective action, as we contribute to the communities and networks.

Here are my curation:

Paper.li on Connectivism Education and Learning

Scoop.it on Connectivism and Networked Learning

Thought leadership is an activity measure that examines whether current papers are building on the more recent discoveries or on the older discoveries in a field.

An agent is considered a thought leader if it is building on the more recent discoveries in its field.

But it is not their joining patterns which are most interesting; it is what they do and what they value while engaging online that really matters. The overwhelming majority of respondents (95%) told us that the primary reason they participate in online communities is to gain access to thought leadership they could not find otherwise. 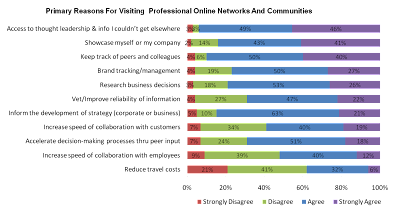 Professionals understand and are acting on the core value propositions of an online community: a 24X7 platform to exchange ideas, learn from thought leaders and connect with peers, rather than simply watching and comparing notes. Professional networks and online communities support the age-old traditions of thought leadership, intellectual debate and the pursuit of both practical and theoretical knowledge to help make us more skilled in our work, illuminate our thinking and shape us into better men and women.

Is emotional intelligence important in the cultivation of thought leadership?  I would argue that certain degree of emotional intelligence is necessary for individuals, as any ideas or thoughts once conceived and developed would still need to be spread and propagated through certain media, networks in order for them to “live a life of its own”.  A sense of self awareness, confidence and control is necessary not only in the conception of ideas and development of knowledge, but also in the communication and “broadcast” of ideas in the network or community.  It is also important to understand the relationship between leadership and emotional intelligence, where managing one’s emotion and understanding others’ emotions are closely linked to effective leadership.

I found thought leadership useful in networked learning, in particular when applying this concept in the case of networked organisation and community leadership.  Thought leadership has none of the managerial overtones of organising action, executing tasks, making decisions or coordinating effort toward achieving joint goals.  In fact, there might not even be joint goals in the small groups or communities.  Instead, the emphasis could be the creation of new knowledge and development of innovative ideas through builds and bounds of ideas, conversation and dialogues.  In this context, thought leaders are not empowered, not given authority to make decisions.  They are, rather, what Hamel (2001) calls revolutionaries, employees who challenge the status quo and press for change. (see Thought leadership)

It is further noteworthy to contrast such thought leadership with the elements of effective leadership as summarized in  leadership and emotional intelligence – development of collective goals and objectives; instilling in others an appreciation of the importance of work activities; generating and maintaining enthusiasm, confidence, optimism, cooperation, and trust; encouraging flexibility in decision making and change; and establishing and maintaining a meaningful identity for an organization.

Does thought leadership require the establishment and maintenance of a meaningful identity for an organisation, a community, or a network?  This is where I think more researches are needed to explore.

Do kids have too much homework?

Homework is like any assignment or task at work, only that if it is too much, it could cause fatigue. Homework could include blogging, wiki authoring & collaborative writing, apart from the traditional assignment of book reports, completion of worksheets or projects.

There might be correlation between the amount of homework with the assessment score, but I reckon it’s the quality of homework, feedback and reflection that matter most, in improving the performance and learning. Practice makes perfect is only “true” if practice (like blogging, cycling) is followed through a learning cycle of plan-do-check-act or “trial and error” with feedback.

For me, I think an adequate amount of homework for the young kids is necessary, to reinforce their learning. Too much homework at a young age may demotivate kids from learning, especially if such homework is based on routine rote learning. Stimulating, interesting homework (such as blogging, wikis, forum postings and discussion) for teenager and adult students might be better alternatives, though this again depends on individual needs.

On many other topics that you may be interested to learn.