At last, we have a wonderful post responding to this very important question, and it seems that under the current climate and education ecology, rules and regulations could constrain, if not strangle online education and learning significantly.

I argue here that:

How to ensure assessment is done consistently and reliably in these x MOOCs?  How to ensure that the learners in the MOOCs are really who they claim they are, especially when taking tests or examinations?  How to ensure that the assignments submitted are based on the learners’ own work, and not a copy of others?   How to prevent cheating and plagiarism among learners in MOOCs?  Though it is argued that you can’t cheat in a MOOC, as it is not for University credit as the author suggested, but it has been revealed that the University of Washington said it will give credit for its Coursera classes.

It might soon be a common practice in giving credit based on those x MOOC classes, when identity and assessment issues are solved.

Another huge challenge rests with the economic models that would be adopted  for these x MOOC, and how they could ensure their sustainability in the long run.

How will MOOCs make money?  Various ways of making money though MOOCs are discussed there.

“One of the more provocative potential business models for MOOCs is to bypass credentialing altogether. Udacity has suggested that it might double as a headhunter for companies that might like to hire some of its more impressive students. Instead of simply selling those students credentials that they can list on their resumes while looking around for jobs, Udacity would offer to match students with companies that have enlisted Udacity as a talent scout. (The company has already hired a full-time jobs counselor to lay groundwork with potential employers.) Udacity would take a commission for each successful match, same as a headhunter.
A sustainable model would need to be based on a fee for service – i.e. requiring a fee for the award of a certificate from the University.  ”So far the only revenue stream that the major new MOOC providers have said they will pursue is charging a fee for a certificate.”
To what extent would institutions be ready for the development of a business model and plan?  What would be the actual running cost per participant who successfully completed in a MOOC?  These are important considerations for any Higher Institutions, before they would embark on MOOC.

There could be a need to “re-bundle higher education” as has been practiced in Colleges and Universities, in response to the x MOOC movement (see this online-learning-and-the-unbundling-of-undergraduate-education).   This means that Universities have to think of something else to sell (this post on when-courses-are-free-online-whats-left-for-universities-to-sell) in order to compete in this global higher education market.  Andrew however states: “While Australian universities have control over the most valuable credentials in the Australian labour market, and while they offer students an attractive broader experience, we can expect their long-term growth to continue.”

In summary, the x MOOCs that were introduced since last year has led to the opening up of new open online education opportunities for free to global learners.  These MOOCs have now attracted more than million students, and more students around the globe would be expected to join soon.  It is unsure how these MOOCs would evolve, even in the coming months.  There are lots of concerns as cited in various posts.  Nevertheless, the current trend of more universities forming alliance or joining the movement in offering MOOCs in the US have opened doors for experimenting new and alternative models of Higher Education.  It seems that these have already “disrupted” the usual offering of HE in the US Universities, and probably more universities in many countries would be developing strategic alliance with the top universities in the offer of new MOOCs.  This lead us to rethink about the challenging question: Can online courses transform Higher Education Industry?

I do wonder if education should go beyond providing workers for the employers as Andrew says:

How safe is this qualifications-awarding power from cheaper competitors overseas? So long as employers recognise government-approved Australian qualifications above all others, this will substantially protect Australian higher education providers from international competition.

There has been recent debates relating to the qualifications and accreditation on MOOCs, where MOOCs are evaluated and considered for accreditation and credits in degree courses.  See this due credits for degrees.

This would surely impact on the professors and teachers in Higher Education as I have shared it here.

In summary, unless we have resolved the tensions and conflicts between rules and regulations on Higher Education and that of the experimental MOOCs, it is hardly possible to introduce MOOCs successfully as a “replacement” or credits for degrees.  Cheating and plagiarism in MOOC would not be prevented or controlled even with the most stringent measures, though there has been some progress to-date.  This significantly impact on the credibility of MOOCs being evaluated with the equivalence of an online education degree by a prestigious Higher Education Institution. Such constraints may also limit the possibility of truly transforming Higher Education in the near future.  Nevertheless, there has been initiative in introducing homegrown MOOCs here in Australia through the new platform with open2study.

What would you suggest to move MOOCs towards a more “productive” contribution to Higher Education on a global basis?

Would think global, act local be a way to go?

Which should come first?  Assessment and accreditation, or Learning in MOOCs?

In the case of MOOCs, it seems that rules and regulations would likely hinder the growth and development of “best and emergent” practice in online education and learning, as revealed in both c and x MOOC movement.  Researches into MOOCs indicate that MOOCs do not always follow the “basic” rules of business model, as xMOOCs still don’t have formal, explicit business models upfront for institutions to clearly follow, as best practice, and that the massive number of “non-completion” would not conform with the rules set by the institutions.  Also, which pedagogy reigns better?  Teacher centred model, or learner centred model in MOOCs? 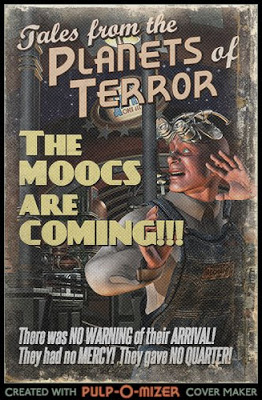