Have just re-visited some videos on emotional intelligence:

The Art of Managing Emotions

You would find some of my previous posts on Emotional Intelligence: here and here.

Whilst emotional intelligence is critical to success in managing emotions in personal life, managing customer service and organisation leadership, I think we need more empirical evidence and researches to support those claims relating to Emotional Intelligence and its impact on individuals and organisation.

Refer to this presentation by Peter Salovey on Emotional Intelligence.

Some papers on Emotional Intelligence (EI): here on EI and here on the measurement of EI.

If people haven’t heard a word from the leader and could still achieve the goals, then he/she could be the greatest leader. Why? Because, his or her actions speak out what he or she wants to communicate, not by words. It’s what people act (and serve) in the community/network that makes good leadership. And great leadership must come from people who shared the vision, when everyone becomes a leader, and at the end of the journey said: “We did it ourselves” (a quote from Lao Tze on leaders). The greatest leaders do not seek for fame or honor, like Jesus, but do require people to think, reflect and act, so we live our lives in full, despite obstacles and challenges.

What is the difference between management and leadership?

In the case of networks, what would leadership look like?

In this Applying Design Thinking and Complexity Theory in Agile Organization by Jean Tabaka, the focus of leadership in networks would be based on emergence and resilience.  To this end, I reckon distributed cognition, with distributed and emergent leadership would be a way to go.  This leadership characteristics may be based on the Cynefin Model as developed by Dave Snowden. 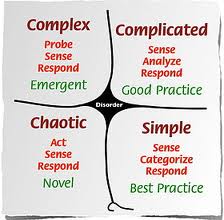 How to move beyond management and leadership in networks?

The most effective sort of leadership in networks may emerge out of a blend of peer leadership and servant leadership.