This 35th week’s session of Change11 focuses on Interaction Model and Equivalency Theorem by Terry Anderson:

Here is part of the post by Serenaturri, which contained the transcript of the chat in Terry Anderson’s Blackboard Session.   Thanks to Serena.  Sorry that I couldn’t read Italian, so here is the English translation from Google Translate (blog’s automated translation).  I hope this is acceptable, as openness is encouraged, as the recorded session is also open to the public for viewing.

(Stephen Downes 20.08) – In MOOC PLE I learned an important lesson: – do not let my employer is responsible for the website – have stopped and blocked all access to anything related to PLE.

(1 DanBassill 20.40) – @ Mark – teaching students to access and utilize these resources is the new challenge

(Mark McGuire 20.47) – Re: OERu: Phil Ker (Head of the University of Otago), said at a recent conference (DEANZ2012) that encourage students to study without the help of institutions is a key change must be taken into consideration.

(Stephen Downes 20.52 # 2) My opinion is that the new learning model will not arrive until you can get a doctorate from the recognition of learning rather than through some process of jumping through the hoop.

(SheenaW 20.54) @ Jennie, the key is to foster the development of self-directed learning skills.

(Mark McGuire 20.55) @ Jennifer Maddrell: The purpose of a PhD is to separate those who are inside from those outside. And focus on the importance and the height of the wall.

(Frank20.58) – The issue of quality is the degree of interaction MOOcs student – student – connections

(1 DanBassill 21.01) – Thanks to all. It ‘s nice to see the informal interaction between people who are legends in this field.

By examining the educational experiences online personal, carried out in different universities, I have the opportunity to validate the equivalence theorem of interaction proposed by Terry Anderson. The theory postulates that if any interaction (student – student, student – teacher or student – content) is high quality, the other two can be reduced or even eliminated without compromising the learning experience.

“The MacGuffin is common in films, especially thrillers. Usually the MacGuffin is the central focus of the film in the first act, and then declines in importance as the struggles and motivations of characters play out. It may come back into play at the climax of the story, but sometimes the MacGuffin is actually forgotten by the end of the story. Multiple MacGuffins are sometimes—somewhat derisively—referred to as plot coupons.[2][3]“

“The term was popularized by Alfred Hitchcock, who actually credited one of his screenwriters, Angus McPhail, with the creation of this concept and the name for it, citing a particular school-boy joke:

A man is riding on a train when a second gentleman gets on and sits down across from him. The first man notices the second is holding an oddly shaped package.
“What is that?” the first man asks.
“A MacGuffin, a tool used to hunt lions in the Scottish highlands.”
“But there are no lions in the Scottish highlands,” says the first man.
“Well then,” says the other, “That’s no MacGuffin”.”
What is the content then?  Content is merely the entree to a “dinner”, where people could start the conversation, and engage with it in order to explore what is behind it, like what Alfred has used.
What I found it useful in Terry’s session is that the Student and Student interaction together with Student and Content interaction are better than those with Student and Teacher interaction in terms of both achievement and attitude, as reported in Bernard’s research summary. 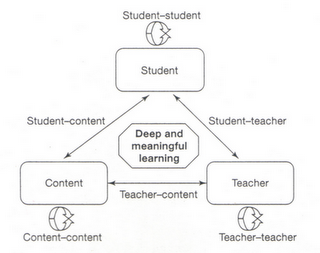 Image: from George Hobson’s post and Terry’ slide
In MOOCs such as Change11, the posting of links, contents and even the slides, blog posts are part of the McGuffin, if one may argue.  Deep and meaningful learning would occur if there are deep reflection by the student, or students, or teachers, when the key points and learning experiences of these artifacts, posts, video recordings, etc. are picked and chosen for discourse, debates and critically examined in lights of individual experiences and perceptions.
This is similar to the model of learning as proposed by Rita Kop et al:

The critical point in those learner dialogue and interactions would be how learners could engage in the dialogue and conversation, between learners, educators and content, and how such learning would perpetuate throughout the learning journey, individually, or as a group or network.
I am yet to reflect on how such interaction would influence the way MOOC is designed, delivered and reviewed.
Jenny Mackness and her colleagues are starting this exciting journey of exploration with their unique model – fslt12, based likely on a COP approach.

8 thoughts on “#Change11 On interaction and engagement in MOOC”